Well-being indoors is determined by various factors. Apart from the acoustics, the quality of light and the thermal comfort, even constituents such as particles, microorganisms or liquid gases may affect the quality. Everything depends on the volume of the constituents and on the heating, ventilation and air conditioning (HVAC) systems, which have to be designed, built and maintained in such a way that any nuisance caused by pollutants is prevented. If the hygiene requirements are not met, which is the case with several HVAC systems, it is easy for constituents to impair the quality of air. If an increased concentration of the constituents in the indoor air has a negative impact on the well-being and health of the human beings, the world of experts speaks of pollutants loads.

Consequently, the issue is always that of the air quality that is decisive for the well-being of the human beings. The ionair Air Quality System (AQS) improves the quality of indoor air significantly. Studies clearly indicate the correlations between health, well-being and the physical performance with the ion content in the air. Ionized air contributes to a perception of high level of air quality. This has been the outcome of various and independent measurements of air quality. The effectiveness, i.e. the benefits of the ionair AQS systems of all relevant parameters, is crucial.

A large number of VOCs (volatile organic compounds) are reduced, by and large, by 30 – 80%. The reduction depends on the time and the concentration. Often, the limit of odor perception is deep and therefore a few percentage points help in terms of generating a neutral situation from annoying air.

VOC is the common name for organic, hydrocarbon-containing substances, which evaporate easily, are volatile or are available as gas at low temperatures (e.g. room temperature).

2. Olfactometry (up to 50%, depending on the application)

Olfactometry, the effect of odors on persons, best indicates the odor perception of human beings. Odor panels determine the odor threshold of a sample based on dilution volumes. The results are prepared statistically and presented. ionair AQS reduces odors by around 50% according to DIN 13725. This is equivalent to the neutralization rate of an activated carbon filter.

3. Microorganisms (up to 99%, depending on the application)

Microorganisms such as germs, bacteria, fungus or pollen are biologically active. Their multiplication and lifetime are different and greatly depend on the environmental conditions. With multiplication, the microorganisms can definitely impair the metabolic processes of the human being, cause infectious diseases or trigger allergic reactions.

Viruses are infectious organic structures that can only multiply in a host cell. There are approximately 3,000 types of viruses, each of which has different characteristics (e.g. structure, particle size, or environmental stability). A healthy immune system usually protects people from contracting a disease.

Droplets or aerosol, i.e. the air, serves as a transmission media for the virus. The verification of deactivation of viruses in aerosols is complicated and it is only been more widely applied since the start of the COVID-19 pandemic. Ionair has conducted extensive investigations for this purpose jointly with the Fraunhofer Institute for Building Physics.

From these tests, it has been scientifically demonstrated that Ionair’s ionization technology has a deactivating efficiency of over 99% on surrogate viruses with a comparable structure, particle size, and environmental stability as SARS-CoV-2, while at the same time complying with all statutory requirements and specifications for indoor air.

5. Fine particles (up to 50%, depending on the application)

Fine particles are a part of floating particles and the definition of fine particles goes back to the «National Air Quality» standard for particulate matter (in short, referred to as the PM standard) of the US American Environmental Protection Agency EPA that was introduced in 1987. Approximately 90% of the fine particles in the atmosphere are of natural origin, such as, for example, aerosols from seawater, from volcanic activities and forest fires. The remaining 10% are of anthropogenic origin, created primarily by the combustion of carbon compounds. The main triggers of the proportion of fine particles caused by human beings are the economy as a whole, the roads, air and rail traffic, private households and small consumers, as well as even agriculture. All sectors contribute to the formation of fine particles, but of course, in varying volumes. Fine particles are also present indoors. Fine particles might become separated by sedimentation or by absorption at a particulate filter.

ionair acts on particulate matter in accordance with the principle of agglomeration. Small parts get charged by the ions, attract each other, agglomerate to larger ones, and thus sediment faster.

Air ions are electrically charged particles, which adhere to unstable gas clusters and are always found freely and abundantly suspended in the air. Other than atoms and molecules, ions more or less have electrons – therefore, they carry either a positive (too few) or a negative charge (too many) with them. Regarding their mass and mobility, the ions can be divided into three groups: small, medium and large ions. Since small ions can easily penetrate into the lungs, they have the greatest bioclimatic significance. 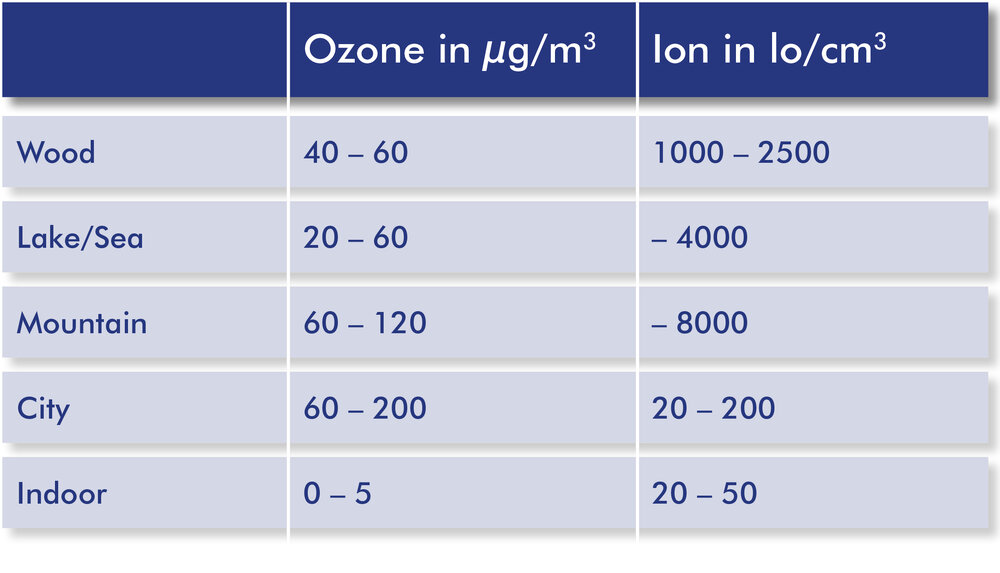 The air becomes richer in energy with ionization and is therefore more easily reactive. This can be understood and measured by air quality parameters and is comparable with unadulterated clean room regions. In such regions, the concentration of pollutants and thus, the oxidation potential is low, which is why more activated oxygen (oxygen ions, natural ozone, etc.) is present, which is equivalent to the values in mountainous regions such as the Jungfraujoch or Rigi.

The effect of ionized air on human beings has been proven on the basis of studies and measurements. The physiological significance is primarily associated with the metabolic processes in the human body. A perceivable effect is the feeling of fresh air. The respiratory tract becomes neutralized by the exchange of charge, which takes place with the supply of artificial ions and is comparable with the air after a severe thunderstorm. A biological stimulation takes place with the intake of ionized air that triggers various positive physiological processes.

Varga, in his research reports of 1972 and 1986, offers the most comprehensive representation of the effect of air ions on the physiology of the human being. In his studies, he has investigated the oxygen concentration in the blood, the blood pressure as well as the pulse rate of his subjects. Varga was able to prove effectiveness with all three factors. He determined an increased concentration of oxygen in the blood of non-smokers, as well as a reduction in the pulse rate and blood pressure with the majority of the subjects. 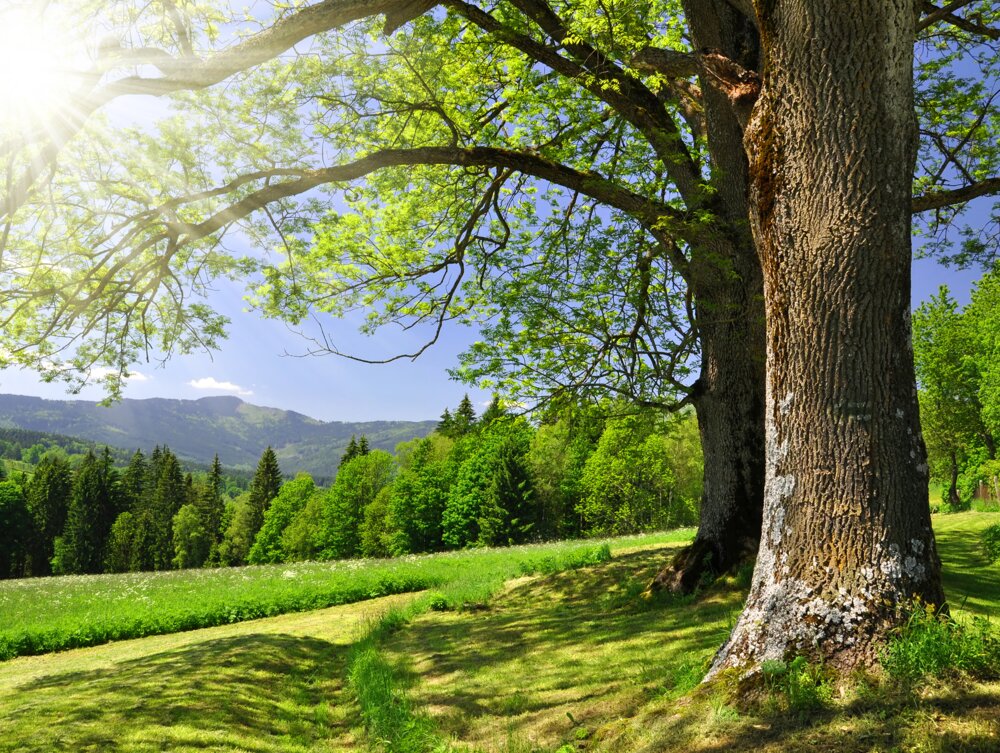 Since most of the studies are restricted to the directly demonstrable physiological effects of air ions, such as the absorption of oxygen, there is, nonetheless, some reliable evidence that has determined the well-being of the subjects. It has been determined that with the ionization of indoor areas, there have been general findings recorded such as a feeling of less fatigue.

Laboratory studies have clearly established that with ionized air, an antibacterial effect could be demonstrated. The ions with a negative charge (see above) had an effect of reducing the existence of bacteria. Measurement results have shown that with powerful ionizing devices, the reduction of VOC and microorganisms up to values approaching 0% of the initial concentration have been achieved.

On the one hand, the human organism is less severely burdened with microorganisms, fine particles and pollutants by lower loads in the air. On the other hand, the higher energy density of the air improves the metabolism in the body, which has a direct impact on performance or productivity. The favorable result: The human beings are more productive or other absenteeism drops. Healthy air generates healthy human beings and healthy human beings create greater added value.